Master Johnny Ahmed has been a life time martial artist and Tae Kwon Do practitioner. I have known him for a few years now since he was running West vancouver Martial Arts. He moved to Richmond few years ago and now owns Richmond Martial Arts school, one of the biggest and most successful martial arts schools at Richmond, BC. 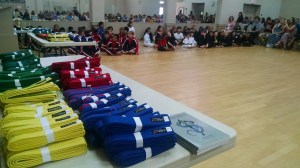 On September 13, 2014 tens of students and their families gathered at Ukrainian hall at Richmond. While the scholl itself is pretty big there were almost 200 people who could not fit in the school. 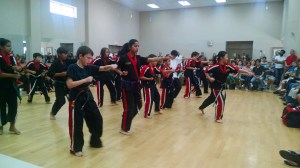 This was a great showcase of students skills from the white belts to new junior blackbelts. Students performed their techniques, forms and broke boards. There was also demonstration of self defense and one very talented martial artist had come all the way from USA for a freestyle demonstration of muscial forms with weapons. Tanner Simpson later had a seminar at the school.

This was a very fun event in a family atmosphere on a georgous sunny Saturday. Certainly a day to remember. Richmond Martial Arts offers classes in various disciplines for all age categories such as Tae Kwon Do, Brazilian Jujitsu, Capoeira and etc.