While still not an Olympic sport, Karate is probably the most well-known martial art of the world. With the rise of MMA people sometime forget where the fundamental techniques come from. Karate is the art of fighting, self-discipline and self-improvement.

As a student of both traditional martial arts and modern disciplines I appreciate both aspects and have been trying to give recognition to the instructors who have devoted their lives to martial arts. 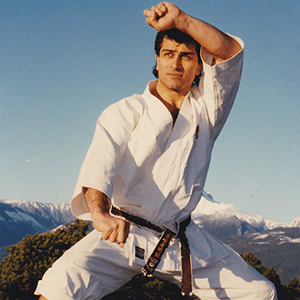 Sensei Ramin Emami has been a life time practitioner of the Shotokan Karate one of the major styles of Karate. A 5th dan master instructor has spent years training in Japan and has been teaching for over twenty years now. He has spent some time with us while being super busy. Here is our interview with Sensei Ramin:

Long story. Totally different. Here martial arts is all about Trophies and Titles… back there really more a fight against your SELF defeating your weaknesses.

Humility and Character development is really felt (there) and here Ego, instead

2- With the rise of MMA specially in the past 10 years, how do traditional martial arts like Karate keep their relevance?

The better one’s understanding and expertise in traditional martial arts the better one performs in MMA type fight. Traditional training lays down the ‘foundation’ that once used by any athlete he can expect to find improvement in his performance, generally, in any fighting situation. But Traditional Karate is more than just the fighting aspect (more than what’s done in MMA type fights – with heads up and preps in advance). Not everyone is expected to understand what’s explained here… perhaps because extensive education in martial arts is needed. Most people just see the surface

3- You have been running successful schools for years. How much has changed in martial arts business in the past 20 years?

Our industry sure had its ups and downs in the past 2 decades. And MMA sure created a fair bit of confusion. But that wave is not as strong anymore, and as I see it traditional styles are going stronger now, than ever… as people seem to be more educated to know the difference between fighting and “martial arts” … far beyond fighting. A lot of valuable and strong skills are picked up from a rich well delivered martial arts program.. Far more effective in LIFE than just the physical techniques… addressed esp. in traditional settings.. Although, not all schools really address all that is there to be picked up (specialty line within martial arts/karate)

5- What has encouraged you to focus on kids and youth programs?

Kids have far more potential. It’s really hard to make real, fit, black belts from people in their 30’s plus… 17 years focus on Adults Only proved this. Then we switched. What you can teach kids is far more rewarding.

To learn more about Sensei Ramin and his school visit www.the-powerhouse.ca